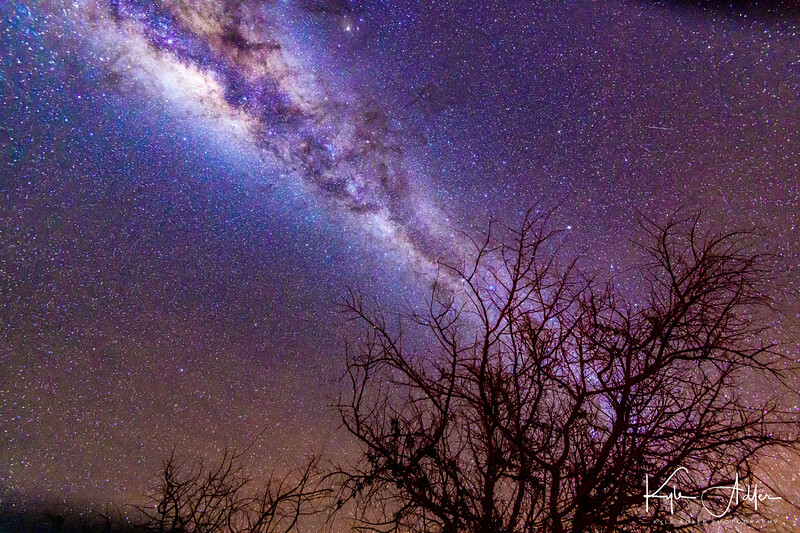 Chile’s Atacama Desert, with its clear and dark skies and perfect latitude, makes a stunning location for capturing the Milky Way. Not too long ago, making images of the Milky Way was not practical for most photo enthusiasts.  Only astronomers and a handful of professional astrophotographers had the expensive equipment required to capture sufficient light from the cluster of quite dim stars that we refer to as the Galactic Core in the night sky.  Shooting with a very long exposure didn’t do the trick for the Milky Way, because leaving the camera’s shutter open for more than about 15-30 seconds would blur each star’s image due to rotation of the Earth.  These blurs, called star trails, could make for striking images with the stars appearing to streak in circles across the sky, but the subtle beauty of the Milky Way would be lost with these long exposures.

But in the last 5-10 years, camera sensors have become much more sensitive to light, and now it is possible–indeed quite easy–for photo enthusiasts to photograph our home galaxy without expensive specialized equipment.

You will need a camera with a sensor that can gather a lot of light and with a shutter that can be kept open for a long time.  These requirements limit the range of suitable cameras to full-frame DSLRs and mirrorless cameras, as well as a few higher-end crop-sensor cameras.  You will also need a fairly fast wide-angle lens: I recommend a zoom or prime (fixed focal length) lens with a focal length of 14-16mm on a full-frame camera, and a maximum aperture of f/4 or faster.  For astrophotography I most often use the Nikon 16-35mm f/4 lens.  It’s got great image quality and is well built, and it is wide enough and fast enough for the purposes of capturing the Milky Way.  For those with the financial means, buying or renting a very fast wide-angle lens such as the Nikon 24mm f/1.4 allows for gathering even more light.

You will also need a heavy, solid tripod.  I’ve been successful using a lighter weight tripod for Milky Way shots while traveling, but a good professional tripod is better.  I use the SLIK 615-315 with a ball head.

Finally, you’ll want to have a remote shutter release, either a hardwired cable release or a wireless remote release.  This is to trigger the camera without touching it, so as to avoid blurring the image from the vibration of your touch.

Once you have the right equipment, it’s fairly straightforward to photograph the Milky Way.  Choose a dark sky area, far away from the light pollution of any cities or other sources of stray nighttime light.  It’s best to plan your Milky Way shoot at or within a couple of days of a new moon to further minimize extraneous light in the sky.  Shoot toward the Galactic Center where the stars of the Milky Way appear brightest and most colorful.  Note that the Galactic Center is not visible at all times of year at all latitudes; in many locations in the Northern Hemisphere, it is visible only during the summer months.  To plan for where the GC will be on any given date and time and at any given location, I use a smartphone app called PhotoPills: PhotoPills in App Store.

While the Milky Way is lovely as a subject in its own right, a really good image also needs to include interesting foreground and/or middle-ground elements in its composition.  The image below, made in Chile’s Atacama Desert, is appealing because the Milky Way is seen rising above a dramatic indigenous algarrobo tree. 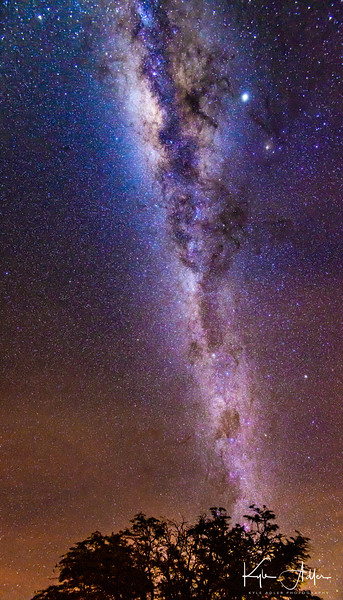 The Milky Way is seen arched through the sky of the Atacama Desert above a local algarobbo tree in silhouette.  Careful composition adds drama to your Milky Way images by including Earth-based subjects as well as the sky.

With your fast wide-angle lens on your full-frame camera, all mounted on your stable tripod, you are ready to shoot.  Remove any filters on the lens, set your camera on full manual mode, select a fast ISO (I usually start at about 3200 and sometimes have to go even higher) and a wide aperture (f/4 or wider), and choose a shutter speed of 20-25 seconds (shorter if your lens is longer than about 18mm).  You can use the 500 Rule, which states that shutter speed should be approximately 500 divided by the focal length of the lens; for example, for a 16mm lens you can use a shutter speed of not longer than about 31 seconds.  Turn off your autofocus on your lens or camera, as it will not work in so dark a setting; instead, manually set your focus to a point near infinity where the stars appear sharp in your viewfinder (or better yet, on your live-view screen).  I like to tape my lens to this setting before it gets dark, so I know the focus won’t change while I’m out in the field in the dark.  It’s also a good idea to turn off your camera’s long-exposure noise reduction feature, if it has one, as this wastes time in the field and it’s equally effective to reduce the noise in Lightroom during post-processing.  Of course, you want to be sure you are shooting RAW files.

Go ahead and shoot a lot of frames, experimenting with different ISO settings and compositions.  It is often a good idea to get a very long exposure, sometimes several minutes long, so that your foreground subjects will be properly exposed.  The frames with the foreground well exposed can later be combined in Photoshop with the ones in which the night sky is properly exposed.

This image was made from several frames: one long exposure for the lake, trees, and mountain in the foreground and middle-ground, and several different 25-second exposures that each captured a different meteor during the peak of the Perseid Meteor Shower.  The resulting image shows all of these objects quite prominently, along with the Milky Way.

You may want to combine several different images to see all the features of the night sky and the terrestrial objects clearly.

In post-processing your Milky Way images, select a white balance that makes the sky and star colors appear natural, apply enough noise reduction to remove visual noise from the high ISO capture but not so much as to soften the appearance of the stars too much, and add some visual punch by painting additional contrast and clarity over the Galactic Center.

Worth the 3 AM wakeup call! A once in a lifetime opportunity to photograph the Milky Way above the iconic mo’ai on Easter Island. We had a bit of cloud cover, but overall I was very pleased with the resulting images.

With practice, you’ll find that capturing the Milky Way is within your reach, so long as you have suitable equipment and the patience required to compile enough images that a few will turn out to be successful.  I believe it’s well worth the effort because a good Milky Way shot is so subtle, colorful, and strikingly beautiful.  Good shooting!

Have you created a Milky Way image that you love?  What were the key components to your success?  What were the challenges you faced?  Please share your thoughts and experiences here.

Want to read more posts about photographic techniques?  Find them all here: Posts on Techniques.