Recently I had the privilege of shooting both the tech rehearsal and first performances of three new dance pieces by very different, wonderfully talented, resident artists at San Francisco’s SAFEhouse for the Performing Arts.  SAFEhouse is a unique program that incubates emerging artists by giving them studio space, expert guidance, and public performances so they can grow and develop new work.  I thoroughly enjoyed getting to know each of the resident artists and having the opportunity to experience and document their pieces.

Each artist and work created a very different emotional affect, so I worked hard to shape my images according to how the performances made me feel.  As photographers we have the capability, like a painter or poet or dancer, to create our art in accordance with our emotions.  This is a point that is too easily forgotten when we’re out in the field shooting.  Today’s post shares a few of my favorite images of the tech rehearsal and performance for each of the artists, along with some brief discussion of how the images were made. 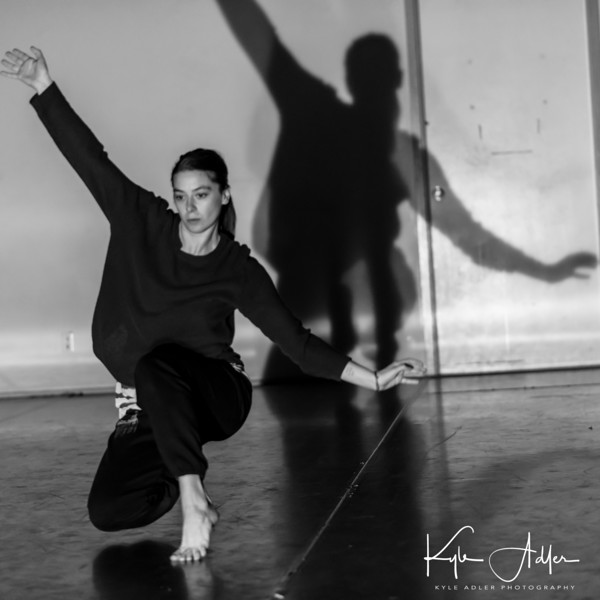 Dancer mia simonovic rehearses her highly improvisational new piece, “residue1”.  I loved her brave and fluid expression through motion of the feelings and sensations that were passing through her in the moment.  This work requires not only real-time improvisation but also the courage to be completely vulnerable on stage.  To capture the spirit of her piece, I made a series of images (one of which is shown here) of mia dancing with her own shadow.  I felt this image would be expressed most authentically in black-and-white, so I made the conversion to monochrome during post-processing.  Buy this photo 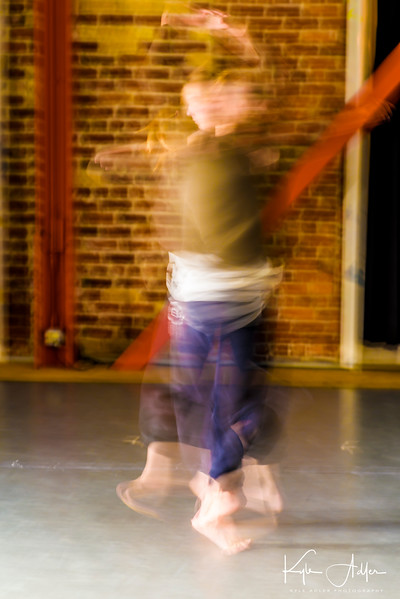 Seeking another method to capture the elusive and transient spirit of mia’s piece in a still image, I decided to try a series of images using a slower ISO and shutter speed to create some motion blur.  To enhance this effect, during post-processing I increased the contrast and vibrance until the visual impact came close to matching the emotional impact I felt during her piece.  Buy this photo 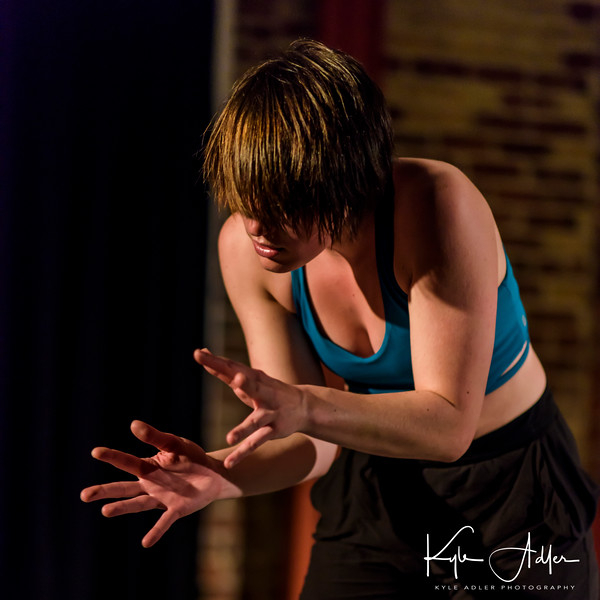 The next artist was Arina Hunter.  Her piece, “Dyspnea,” was unusual in that, instead of using a prerecorded sound score, she accompanied her motion entirely with sounds made by her own body.  Because these vocalizations and body percussion sounds were very soft compared to amplified music, I was able to make only a few images during her performance so as not to disturb the audience members.  Fortunately, I was able to capture many nice images during Arina’s tech rehearsal.  This one nicely captures her lovely expressive hand motions and facial gestures.  Buy this photo 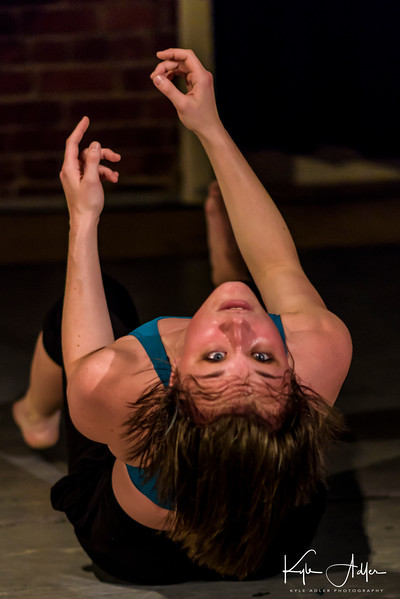 Arina’s piece was very physical and covered a wide range of moves, poses, and expressions.  Here I captured her floor work by getting lying down on the floor of the stage myself so that I was shooting at the same level as her face.  Buy this photo 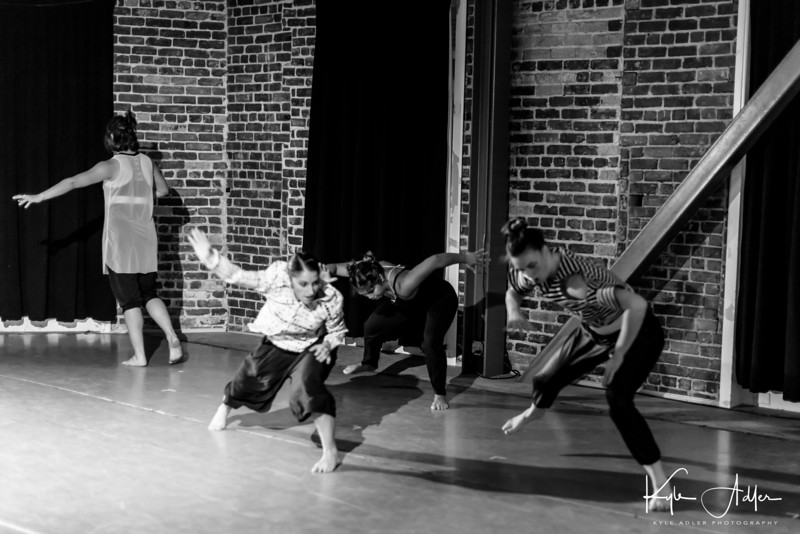 The final piece was presented by Maligrad Contemporary Dance Company, directed and choreographed by Molly Fletcher Lynch-Seaver.  This powerful performance spoke to me of violence and our complicity in standing by while it happens.  I wanted to capture this scene the way I felt it, which was like a gang rumble out of the movie “West Side Story,” so I shot straight into the action, allowing the brick walls and girders to frame the image, and converted to black-and-white during post-processing.  Buy this photo 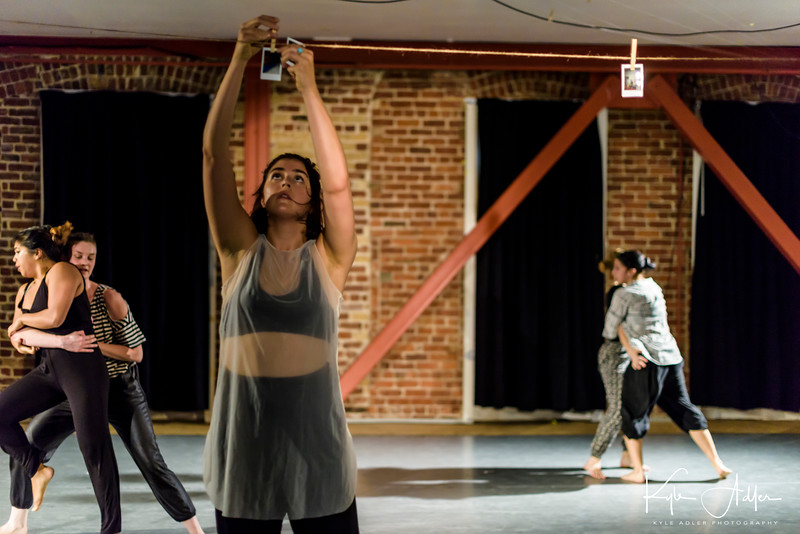 This image was made near the end of Maligrad’s tech rehearsal.  When composing an image in which there’s a lot going on, I find it helps to think like a painter, specifically asking myself, “what elements do I want in the image vs. not in the image, and how do I want to arrange them?”  Buy this photo 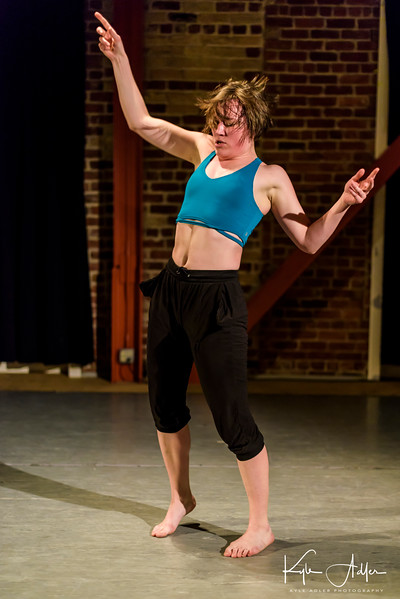 During Arina’s live performance, I was only able to capture a handful of images due to the quiet sound score.  This was a favorite, as it reflects her expressive gestures in face, hands, and body.  Buy this photo 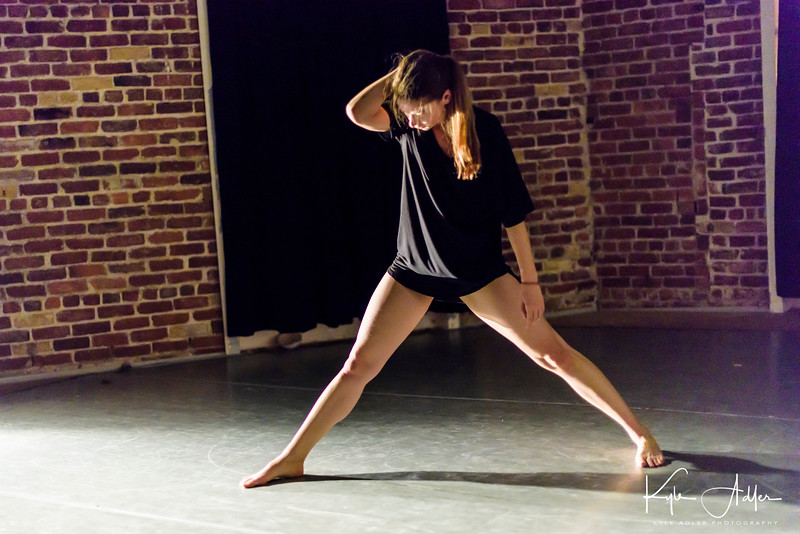 Because mia’s piece is so improvisational, it unfolded very differently in the live performance than in the tech rehearsal.  Knowing this in advance, and also knowing I could not move around during the performance like I could during the rehearsal, I just let myself be moved by her work, capturing the moments that spoke most strongly to me.  This image was made by shooting straight on but has a nice, soft visual appeal that matches her contemplative motion.  Buy this photo 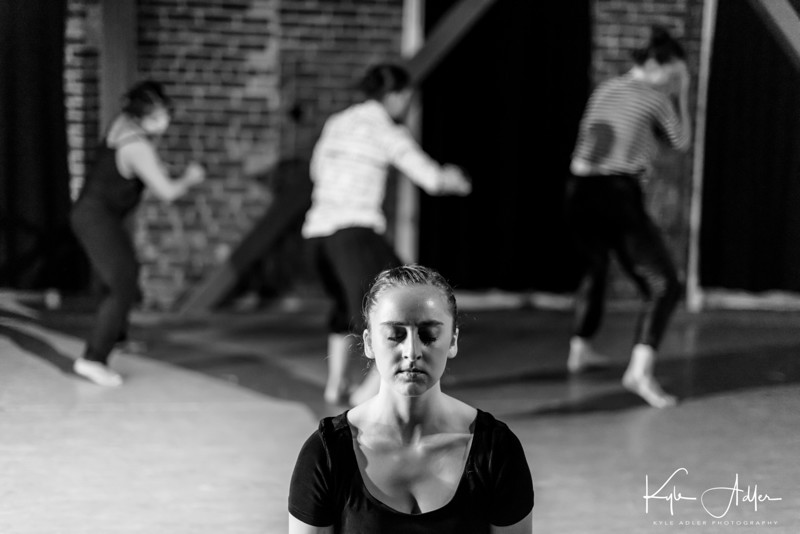 This image, made during Maligrad’s live performance, is another example of the choices we photographers must make when framing a scene that includes multiple elements at different distances to the camera.  I chose to emphasize the dancer in the foreground by using a very narrow depth-of-field (low F-stop number), because I felt the story here was her pain at observing the warlike behavior of the background dancers.  Buy this photo

The final performance of the new works by these three artists-in-residence was Feb. 9, but if you live in the S.F. Bay Area you can follow their work and also look for other upcoming events at SAFEhouse for the Performing Arts.  I hope you’ve enjoyed my images and that I was able to provide a sense of how to shape our images to match the emotional feelings evoked by a performance.

How do you transform your emotions into images?  Please share your thoughts here.