It’s no surprise that San Francisco hosts one of the world’s oldest and largest LGBTQ Pride events in the world.  Each year, the parade and festival grow bigger and better attended.  SF Pride is one of my favorite annual events in my home region, the SF Bay Area, and what I love the most about this exuberant celebration is its remarkable focus on the central human values of diversity, inclusion, activism, hope, and love.  In today’s post, I share some of my favorite images from this year’s Pride Parade, along with a few words about how the images were made.  The goal is to showcase the incredible diversity and sense of social purpose of the participants and observers at this grand celebration, while also striving to capture the small, more intimate, moments.  Remember that you can view–and purchase–all of these images as well as many more by clicking on any of the images in this post.

In a frenzied environment like that of most festivals, parades, and street fairs, it can be a challenge to make a nice clean portrait with an uncluttered background.  Sometimes it’s possible to relocate the subject to an area with a clean and clutter-free background, but most often (as with this portrait) that isn’t feasible.  In those cases, my best practices are to use a moderate telephoto “portrait” lens, select a wide aperture (small F-stop number) to throw the background into soft focus, get in close to the subject, and use a touch of post-crop vignetting during post-processing.

Huge festivals and celebrations such as SF Pride can be overwhelming, with hundreds of thousands of participants and observers present.  I strive to capture the smaller, more intimate, moments within this gigantic environment.  Here I captured a beautiful portrait of two participants sharing their love, which I think encapsulates the entire meaning of Pride events around the world.  I had been chatting with these two people and had obtained their permission to photograph them before making this image.  I used a medium telephoto “portrait” lens and got in close to isolate the couple from the busy background.

Color and texture play a huge role in photographic composition and expression.  As photographers, we’re very aware of these factors when we compose landscapes or nature scenes, but even when making a portrait, we should always be considering the mood evoked by the colors, patterns, and textures in the scene.  I love this portrait for its moody use of the similar shades of orange-red offset against the multiple colors of the flowers and the cigarette.  This is an image that tells a story, but that also leaves most of the story untold. 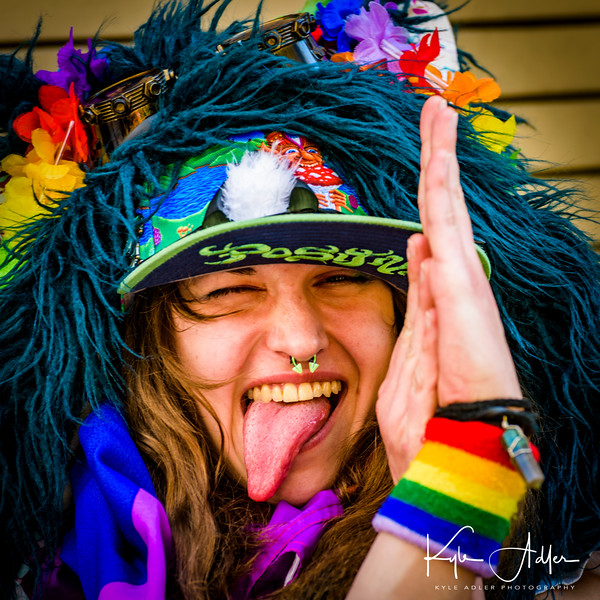 Another intimate portrait, this one made of a young woman doing yoga poses while waiting to march in the parade.  She had an adorable sense of humor and expressive face, which, coupled with her offbeat outfit, made a great closeup portrait.  Don’t be afraid to get in close to your subject, but always get to know them and ask permission first.

An iconic Pride scene, this portrait was made with a longer telephoto lens, its use made necessary by the greater distance to the parade float in the middle of a wide street.  While I prefer to get up-close and personal with my subjects, and to get to know them before shooting, sometimes we have to shoot from farther away, such as during a fast-moving and crowded parade.  It’s therefore important to have the gear and expertise to make portraits from any range.  Even when shooting from farther away, though, my key portrait rules still apply: try to capture the portrait with as uncluttered a background as possible, use a wide aperture to isolate the main subject from the background, and apply a bit of post-crop vignetting during post-processing.

It can be tricky to try to capture nudity in a tasteful way suitable for sharing and selling to broad audiences.  I spent some time chatting with these two activists to get to know them and to understand their cause–overturning San Francisco’s ban on public nudity–before starting to shoot.  Even though they had given me permission to photograph them nude (which is an important courtesy all photographers should follow, although no permission is legally required to photograph people in a public space in the US), my market for images containing graphic nudity is small, so I strive to capture scenes that tell the story but with implied nudity rather than graphic nudity.  Here I found a vantage point that allowed the subjects’ arms to strategically cover certain parts of their bodies.  The resulting portrait conveys the story of their purpose and gets across the idea of their nudity, but is still shareable and sell-able to a broad market.

Another close-up portrait, using the same techniques I shared earlier in this post. 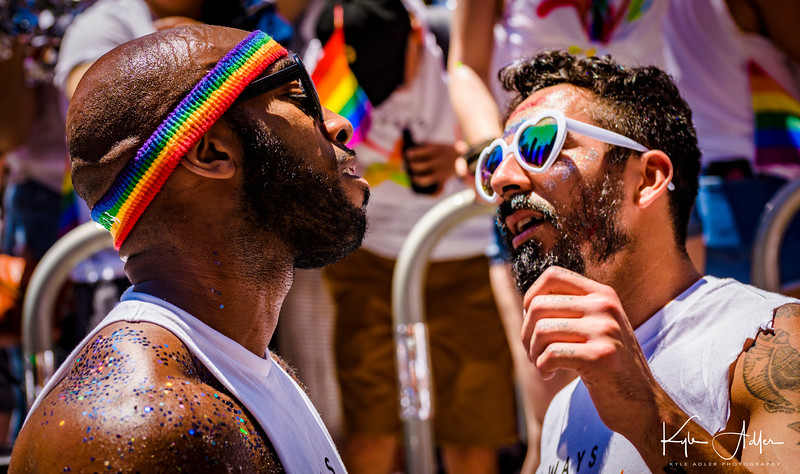 Another of my favorite portraits from the day, this one also tells a small-scale, intimate story, conveyed by getting in close and isolating the subjects from the busy background.  The end result is a sense that these two people are celebrating their own story, even in the midst of the bustling celebration going on around them.

I met this young woman in a very crowded space, but fortunately I had the opportunity to walk her to a less cluttered space to make her portrait.  I’m always on the lookout for quieter and cleaner spaces when shooting festivals and celebrations.  A few steps was all it took for us to find this simple, clean background, allowing the portrait to really pop. 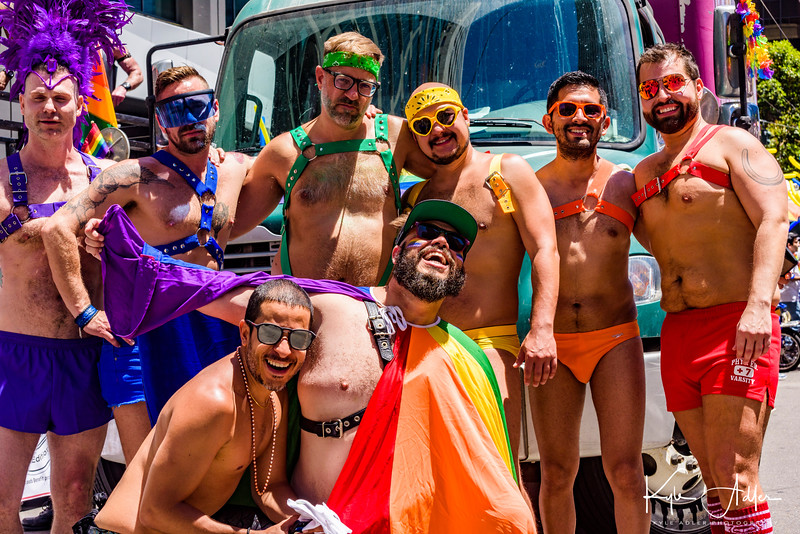 Group portraits pose a special challenge in busy public spaces: how to capture all the group members in crisp focus while also trying to isolate them from the cluttered background.  Here I used a medium aperture to keep the people in sharp focus while slightly softening the background, but since a very wide aperture cannot be used for groups, the softening effect will be mild.  As a result, it’s especially important when making these group portraits to seek an interesting, complementary, or clean background. 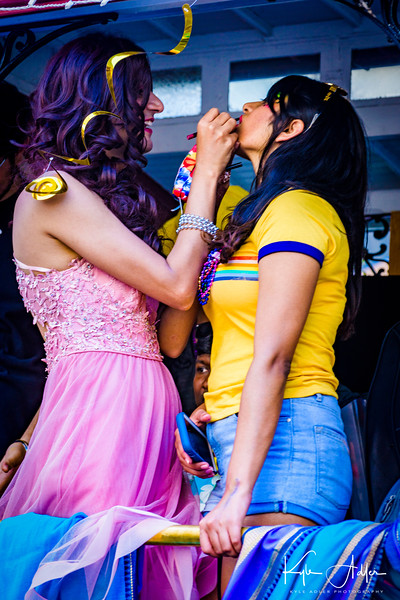 As their float passed by in the staging and assembly area before the official start of the parade, I observed an opportunity to capture this quiet scene of one woman helping to apply her friend’s makeup.  I used a moderate telephoto lens and shot several frames to increase the odds of getting a clean and interesting shot.

When making portraits of kids or seated people, it’s a good practice to get down to their level.  Getting in close is also usually an effective technique, both to isolate the subject and to capture a sense of their spirit.