During a recent trip through the north of India, I had the opportunity to meet with the advisors and some of the young staff at the Balaknama Newspaper, a project to empower the street kids of New Delhi.  I’ve long been interested in the plight of the street kids who live in Delhi’s sprawling slums and have historically been terribly mistreated at the hands of exploitative child labor bosses, a corrupt police force, and often their own abusive families, so this visit was important to me personally.  In this post I share some of the images I made of the kids who risk their own safety to expose the abuses against the young people in their community, and I also discuss how to go beyond the purely documentary function of portrait photography to give your portraits more power.

The images I share here are published with permission from Balaknama’s editor and the NGO who supports the project.  However, I will not share the location of the offices nor the real names of the kids who work there, in order to protect their identities.

The power of a portrait to advocate for social change depends primarily on its ability to go beyond simple documentation and to reveal the personality, background, and/or motivation of the subject.  For this shoot, I wanted to convey the passion and bravery of the young reporters.  I shot with available light only (no flash) in order to capture the intimate and urgent mood of the work the kids are doing.  I used several lenses for different perspectives, but most of the images were made using a fast prime portrait lens.  My shooting perspective was from a low angle so as not to give the appearance of looking down on the subjects.  People appear more empowered when the camera observes them from the perspective of their peers–it should appear as though the viewer is a part of the conversation. 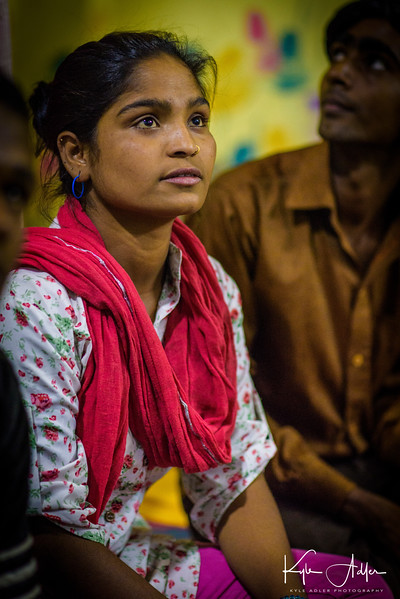 This 17-year-old reporter is also the primary organizer of more than 10,000 of Delhi’s street kids.  I wanted to capture her intensity and focus in this portrait, so I got in close with a medium-length portrait lens and shot from the perspective of a participant in the conversation.  A wide aperture (low F-stop number) is helpful to isolate the subject from the background.  Buy this photo

The “decisive moment.”  I shot several frames of this young reporter as he described the horrific abuses of his peers in the slums of New Delhi, in order to maximize the chances of capturing just the right instant.  I love this image, which to me appears to emulate the drama and body language of Francisco Goya’s famous painting, “The Executions of the Third of May, 1808”. 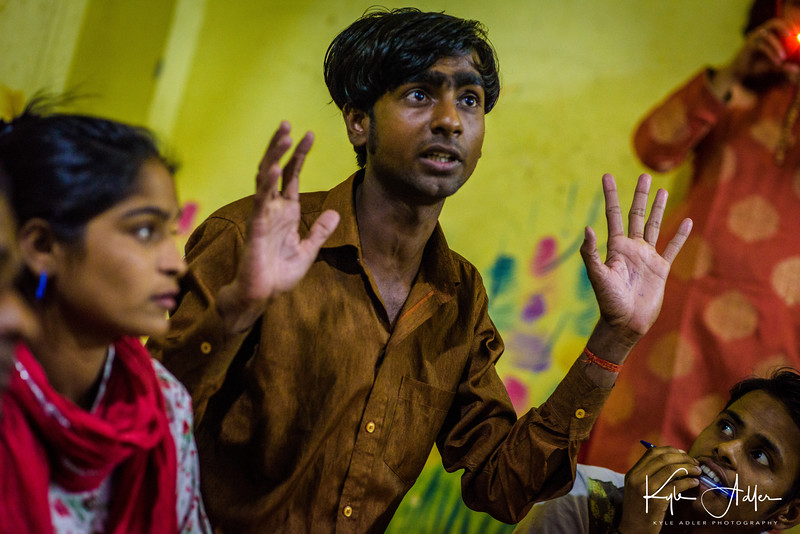 This powerful portrait has a painterly feel and freezes the tension and drama of the harrowing stories retold by the young reporter.  Buy this photo 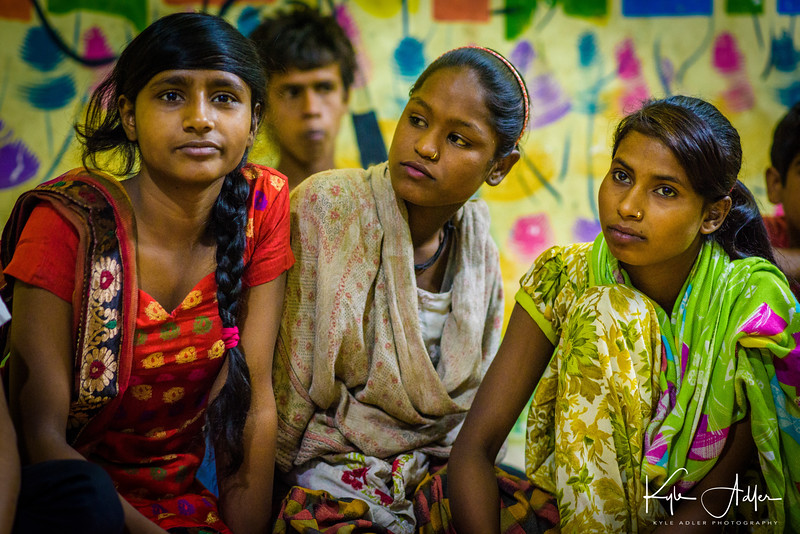 The interaction between the students at the newspaper is an important theme.  Here I worked to capture the girls’ engagement with each other and with the overall discussion.  Buy this photo

Language barriers are less important than many photographers believe them to be.  A simple “thumbs-up” gesture evoked a playful response from these young Balaknama staffers, providing a light moment during the intensity of our conversation.  Buy this photo

As I’ve often written in To Travel Hopefully, it’s important to remember to include your own group in some of your images.  While I most likely won’t publish this image in my stories about Balaknama, I am happy to have this documentation of my fellow travelers as we interacted with the students and staff at the newspaper.

For large group shots in tight spaces, use a wide-angle lens.  This was shot with a Nikon 16-35mm f/4 lens at its widest setting, giving the viewer a sense of the setting as well as the people there.  Buy this photo

I wanted to capture a final portrait of the two primary student organizers as we left the newspaper’s offices, so I asked them to pose together during our walk through the neighborhood.  This gives a sense of the environment in which they live and work.  I got in close using a wide aperture to soften the background, but I also chose a background that would inform the viewer about the kids’ environment.  Buy this photo

Do you have techniques for making powerful portraits that go beyond pure documentation to advocate for the people and causes in the images?  Please share your thoughts here!

Want to read more posts about what and how to shoot while traveling?  Find them all here: Posts on What to Shoot.