When I’m not traveling, I am fortunate to live in the San Francisco Bay Area, where there is never any shortage of amazing photographic subjects.  In a typical week I conduct about 3-4 shoots and I’m always on the lookout for new experiences that will enhance the diversity of my portfolio.  Recently I was invited to shoot the latest monthly show of Tourettes without Regrets, a long-running underground performance held in Oakland, California.  Attracting an extremely diverse and hip young audience, Tourettes presents a completely different variety show each month that can be described as equal parts comedy, poetry slam, circus, battle rap, and burlesque.  While the show is remarkably edgy and raucous (this is a PG-13 rated blog, so you’ll have to visit my main portfolio website to see many of the edgier images), in true Bay Area style it never puts anyone down and instead celebrates all of our differences.  A hot, smoke-filled, jam-packed warehouse, entirely dark save for a few bizarrely colored LED spotlights, is not an environment that is particularly photography-friendly, but I was able to make some nice images through perseverance and creative post-processing.  In this post, I share some of my favorite images along with a bit of discussion about how they were made.

Emcee and Tourettes without Regrets curator, Jamie, introduces the show.  The warehouse was so packed with young spectators that I had to shoot around them with a moderate, fast telephoto lens.  In post-processing, I cropped the image to remove unwanted elements and adjusted the shadow tones to darken the background.  Buy this photo 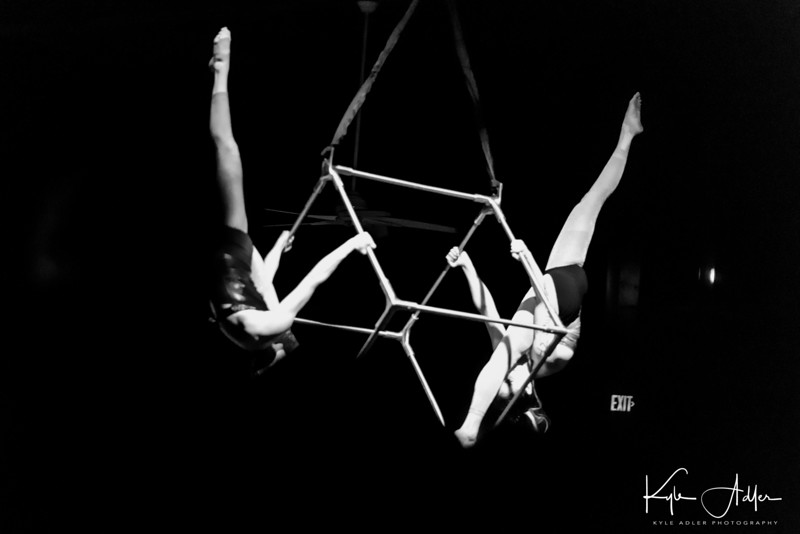 This month, the show’s theme was “F*** Valentine’s Day”, so each act consisted of a pair of performers.  These two ladies presented an aerial act that was mesmerizing but challenging to shoot due to the long distance to the subject, low light conditions, and strangely colored LED spotlights.  I cropped the image in post-processing and converted it to black-and-white to avoid the strange color cast.  Buy this photo 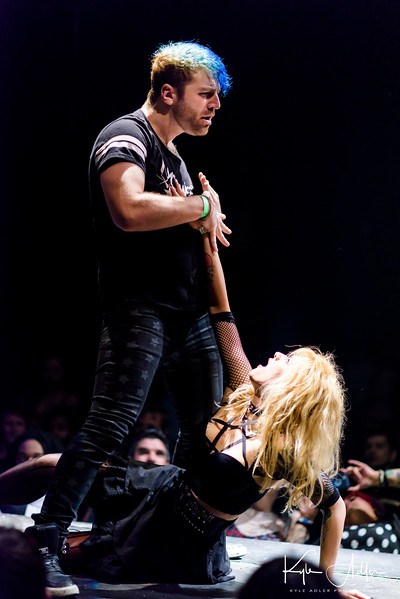 This skit depicts a woman breaking up with her boyfriend, who then tries to win her back with tears, money, and even a marriage proposal.  Nothing works, until he begins to treat her poorly, at which point she decides she wants him, after all.  The image captures an apt moment in the drama.  Buy this photo 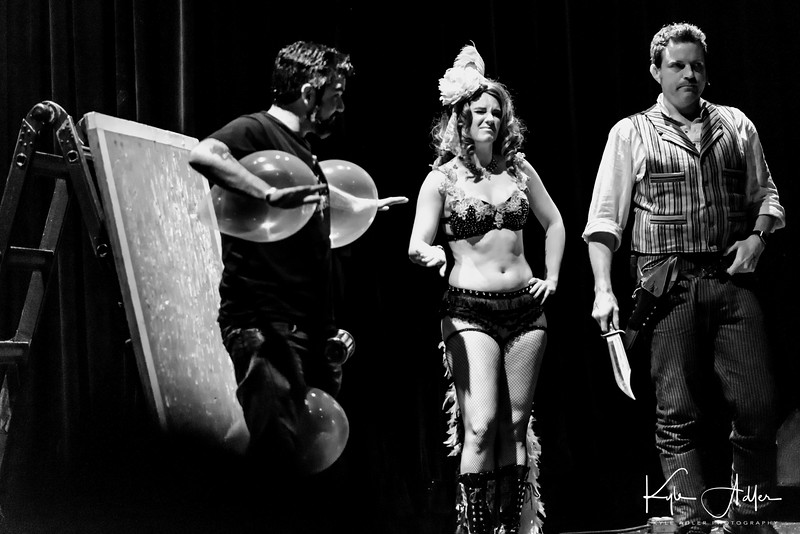 A Crocodile Dundee-style knife thrower and his lovely assistant prepare to terrify a volunteer from the audience.  To capture this act I had to use a high ISO setting and fast lens due to the low lighting and the requirement for a fast shutter speed.  During post-processing, I converted to black-and-white, increased the contrast and adjusted the color channels to enhance the dramatic feel, applied noise reduction to reduce problems associated with the high ISO setting, and cropped to remove extraneous elements.  Buy this photo 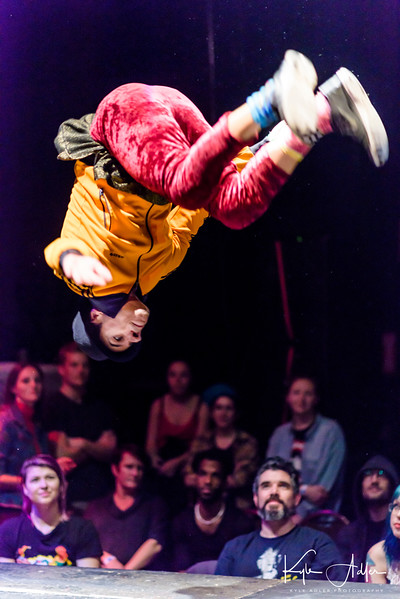 A hip hop dancer amazes the crowd.  A fast shutter speed was essential to freeze the motion.  Obviously, to achieve a fast shutter speed, I needed to use a fast lens and high ISO setting.  Shoot lots of frames in situations like this one, because you can never be sure when the best exact instant will present itself.  Buy this photo

This scene from a battle rap, where two freestyle rappers trade insults, captures the essence of their interaction.  Note the shallow depth-of-field places the emphasis on the performer not rapping at the time, with only the outstretched left arm of the other rapper in focus.  I then converted to black-and-white to remove the color cast and cropped tightly using a square aspect ration to achieve an edgy Instagram-style image.  Buy this photo

What are some of your favorite subjects to shoot in your neck of the woods?  What events epitomize for you the area in which you live?  Please share your thoughts here.