It’s no surprise that San Francisco hosts one of the world’s oldest and largest LGBTQ Pride events in the world.  Each year, the parade and festival grow bigger and better attended.  SF Pride is one of my favorite annual events in my home region, the SF Bay Area, and while I find it gratifying to see the mainstream acceptance of this event, it’s also a bit disconcerting to see this once edgy and over-the-top celebration partly subsumed into a blander, more corporate culture.  In today’s post, I share some of my favorite images from this year’s Pride Parade and Festival.  The goal is to showcase the incredible diversity of the participants and observers at this grand celebration, along with a few words about how the images were made.

The theme of this year’s parade is Resist.  It’s a worthy goal given that gains celebrated over the last 50+ years are being systematically and broadly undone by all branches of the US federal government.  In this image, I wanted to capture an establishing shot of the large parade contingent without losing the personal element, so I used a medium lens and composed to include the first few rows of marchers.  Buy this photo 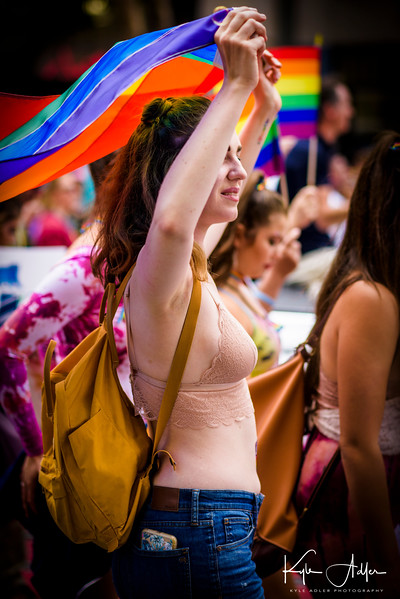 To personalize the message of activism, I focused on an individual marcher.  I used a fast portrait lens set to a wide aperture to defocus the background, and I included the bright pride flag carried over the subject’s head.  Buy this photo

Another individual portrait, this image sets off the subject from the background through use of tight composition and shallow depth-of-field.  Buy this photo

I captured the joy of the young “marcher” by getting in close and shooting at a very wide aperture, so only the young girl’s face is in sharp focus while all other foreground and background elements are soft.  Buy this photo

A touch of post-crop vignetting applied in Lightroom during post-processing helps emphasize the sheer exuberance in this image.  Buy this photo 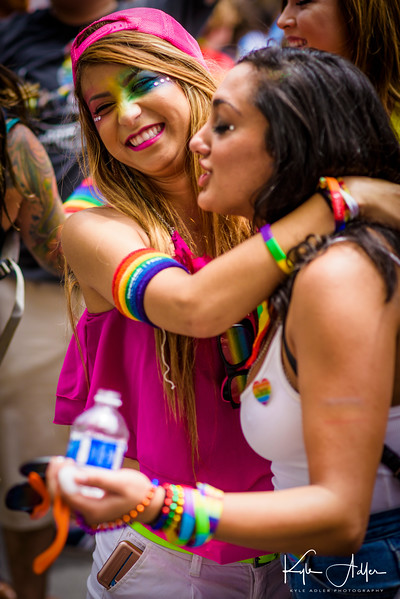 At a huge event such as SF Pride, with more than half a million participants and spectators, it’s important to capture some intimate images in order to emphasize the impact on individual people’s lives.  Here I’ve used an 85mm portrait lens to share a private moment during a big public event.  Buy this photo

Another intimate couple’s portrait, this image is awash in the colors of the pride flag and the marchers’ clothing.  Careful attention to composition and selective focus help bring out the private moment within the context of the larger contingent.  Buy this photo

I’m not usually a big fan of selective colorizing, but sometimes its use is appropriate.  When I pre-visualized this image of a parade spectator dressed in white, I imagined the entire scene in black-and-white except for the vivid rainbow colors of the pride symbol.  It’s an easy effect to achieve during post-processing in Lightroom.  Simply select the part of the image you want to remain in color using the Radial Filter tool, and then remove the color from everywhere else in the image by bringing the Saturation slider down to zero.  Buy this photo

To convey the grand scale of the event, I shot from a low angle and composed to include several rows of festival participants with San Francisco’s City Hall in the background.  Buy this photo