Naatak Indian Theater’s newest and largest production, Toba Tek Singh, opened on July 9 and will run through July 29, 2017.  This grand musical treats the serious topic of the forced Indian/Pakistani separation of 1948 in a lighthearted manner, by examining the issue from the perspective of lunatics in an asylum.  If you live in or will be visiting the San Francisco Bay Area during this show’s run, I highly recommend your attending a performance.  For more information or to order tickets, visit: Naatak Toba Tek Singh.

I had the privilege of shooting the tech rehearsal and the opening night.  Today’s post shares some of my favorite images from the both the tech rehearsal and the first performance, including some behind-the-scenes shots of the actors and crew.  I will refrain from providing commentary on the action in each image, so as not to spoil the narrative. I will, however, provide a few technical tips regarding how the images were made.

When shooting a performance accompanied by live music, try to include the musicians in some of your images.  As a musician myself, I’m aware that these key contributors to stage performances are often overlooked.  Here I captured the wonderful traditional Indian musicians during the tech rehearsal, using a fast normal lens and rendered in a wide aspect ration to include the entire ensemble.  Buy this photo

Part of the excitement of a live performance is the backstage preparation.  With permission from the director or producer, you may be able to go backstage and shoot the cast and crew as they do their costumes, hair, and makeup.  Here I got in close with a normal lens and used a touch of fill flash (off-camera) to saturate the colors and fill in any shadows.  Buy this photo

This show is great fun in part because it is filled with the spectacular antics of the lunatics in an insane asylum parodying the political events of their day.  To capture the sense of lunacy, it’s important to make many images to ensure some will record the perfect moment.  Buy this photo 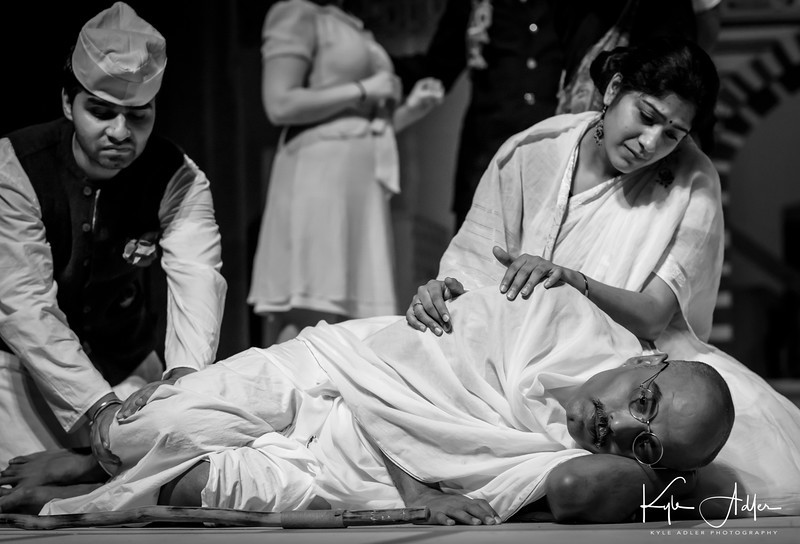 Rendering this dramatic image in black-and-white gives it a pseudo-journalistic feel and harks back to the era in which the play is set.  Buy this photo 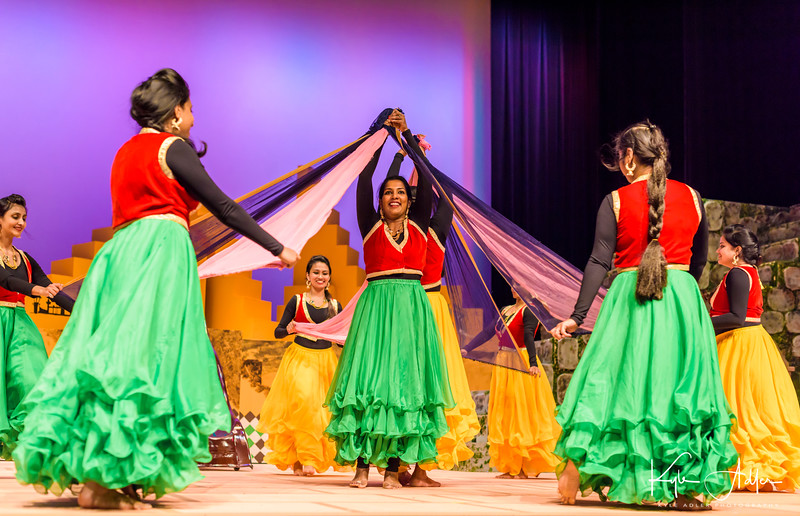 The dancers in this production were more than ornamental; their motion was the physical embodiment of the geopolitical partition between India and Pakistan.  Here I captured the lovely colorful symmetry of their dance with fabrics.  Buy this photo 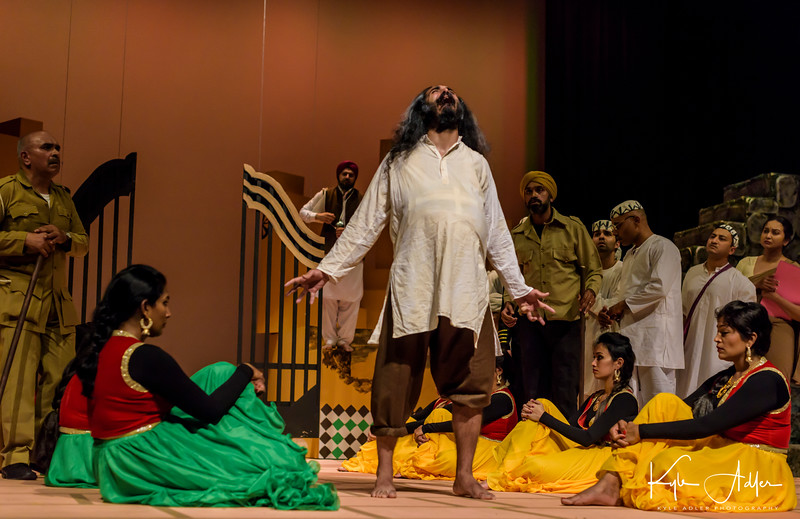 My basic technique when shooting indoor performances is to use a fast prime lens (either a normal lens or a portrait lens) set to a relatively wide aperture (typically about f/2.2) along with a fast shutter speed (about 1/500 second) and a high ISO setting (around 1600).  This simple technique works very well for capturing fast action in low-light situations.  Many photographers work with zoom lenses at live performances, but I find the faster prime lenses give me an edge in terms of speed, brightness, and sharpness.  Cropping can be used in post-processing to achieve the best composition.  Buy this photo

Curtain call!  I like to shoot curtain calls with a normal lens from as far back in the theater is necessary to fit in the entire cast.  The wide aspect ratio shown here makes for a pleasing way of including everyone without too much distracting background.  Buy this photo

Always be on the lookout for an interesting and unusual perspective.  I shot these last two images from the lighting catwalk overlooking the stage from high above.  Of course, you must obtain permission first and follow all safety rules to shoot from such a vantage point.  The benefit: a whole new way of seeing the action on the stage!  Buy this photo

This image of the curtain call from the catwalk provides an arresting, bird’s-eye view of the final moments of the show.  Buy this photo